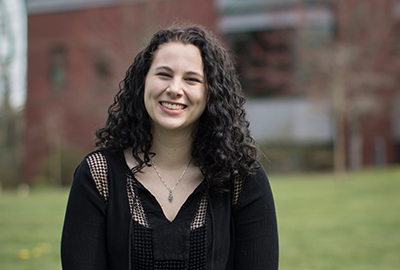 How many 17-year-old young women, when asked about their career goals, say they want to be a “rocket scientist?” — literally.

Now, having won a four-year, $18,000 scholarship through the Museum of Flight’s Boeing Academy for STEM, she’s on her way to becoming a rocket scientist, or more accurately, an aerospace engineer. Cross was one of only nine students in the Puget Sound region to receive this prestigious scholarship. She will attend the renowned Embry-Riddle Aeronautical University in Prescott, Arizona, starting in Aug. 2018.

“I want to design new ways to make propulsion systems more efficient,” she says. After she attains her bachelor’s degree, she plans on pursuing her master’s degree.

A Puyallup native, Cross was home-schooled until age 15, when she enrolled in Running Start at the Pierce College Puyallup campus, as her three brothers had done before her.

“It was an adjustment, being away from home all day," she says. “But it was really good for me, all the social interaction. It made me come out of my shell a bit. I met so many great people who helped me along the way.”

Her fascination with all things aeronautical began in her teens. In her junior year, she participated in the Washington Aerospace Scholars online program. Cross also joined a group called Teen Flight, where they learned to build and fly RV-12s, two-seater light sport aircraft.

Cross does not come from a family of flyers. “My family doesn’t even like to fly,” she says.

When not learning about rockets and planes, this multi-talented powerhouse enjoys painting, weightlifting and just goofing around with friends. She’s also been active in the Girl Scouts for 13 years.

“I’m so grateful for my time with the Girl Scouts,” she says. “I definitely learned leadership skills and gained self-confidence.”

Not surprisingly, Cross was deeply involved in the Girl Scouts STEM program, which encourages girls to explore careers in Science, Technology, Engineering and Mathematics.

She leaves for college in Arizona in August. Will she be flying? “Nope, I’m taking a road trip with my Mom.”