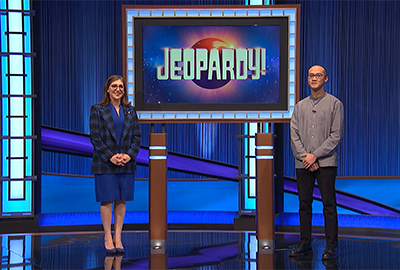 Pierce College English Prof. Vernon Ng remembers growing up, sitting cross legged in front of the TV, watching Jeopardy and Wheel of Fortune just about every night. The idea of being on Jeopardy as a contestant was a dream – and one that would come true years later.

When he decided to take the online Jeopardy test at the beginning of the pandemic, he was thrilled to find that he passed. But considering how many people take the test, he figured it would be a long shot to make it on the show. “I was dealing with tens of thousands of people who take the test, and many of those people pass,” Ng said. “It’s all about luck to get called back, but somehow I was called after I passed the test.”

The next step was to play a mock game of Jeopardy over Zoom, followed by a screen test to allow producers to get to know potential contestants. “I had so much fun throughout this whole process, but I never heard from them again after the screen test,” he said. “I just thought they didn’t select me, until two years later when I received a text asking if I’d be available in two weeks to be on the show.”

During these two weeks, he prepped by watching as many past episodes as he could, reading books, and learning the art of the Jeopardy buzzer. “What I didn’t realize until I started prepping for the show is that it’s not just about who buzzes in first,” Ng said. “If you buzz in too early, you get locked out for a quarter of a second, which can be a big disadvantage.”

He took one day off work to fly to Los Angeles and film his episode – along with the rest of the week’s shows, which are filmed all in one day. Contestants are chosen at random throughout the day to compete, which may have been the most stressful – and fun – part of the day for Ng. While contestants wait to be selected, they get to visit in the next sound stage over, on the Wheel of Fortune set. “It was a surreal experience to see the Wheel of Fortune stage, with a big blanket over the wheel, while we were waiting,” he said.

The show itself was a bit of a blur, he said. His episode aired on Wednesday, April 6, and was hosted by Mayim Bialik, of “Blossom” and “Big Bang Theory” fame. The winner of his episode, Mattea Roach, is on an eight-game winning streak as of this writing.

By the time Vernon reached his Final Jeopardy question, he was tied with his fellow competitor, hoping to claim second place. With the category of ‘small countries’ he felt somewhat confident, but was sure to wager just enough to claim his spot. “I thought the odds were good that she would wager everything but $1,” he said. “So I figured I would wager everything but $3.”

Vernon’s theory proved correct and, although they both got the answer wrong, he ended up in second place, and even managed to write a special note to his niece and nephews in his answer. “It was such a fun experience to be able to take a peek behind the curtain of these TV shows,” he said. “I’d encourage people to go online and take the test if you’ve been thinking about it – just do it, and have fun with it!”