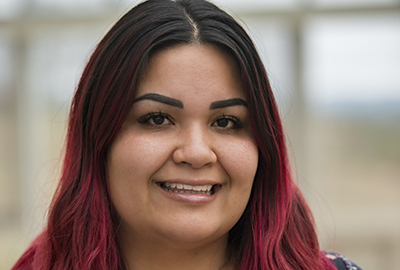 Growing up in a small village in Germany, Manuela Schneider never considered her education as much of a priority. Her mother grew up in Thailand working in rice fields, while her father worked as a grape farmer in Germany. “Both of my parents came from very impoverished backgrounds, and never pushed me to seek higher education,” Schneider said. “After a while, I just never believed I could even do it.”

Schneider only went to school through 9th grade, and had her first child at 16 years old. As a single mom at 16 years old, she struggled to find work that would pay the bills and support her daughter. She found work as a dishwasher and maid in a local hotel, where she worked upwards of 60 hours a week to make enough money to survive. “I had no money, no car or support system at home,” she said. “It was so hard to take care of somebody else when I was barely able to take care of myself.”

She struggled with depression and anger, but Schneider was determined to do whatever she could to give her daughter a better life. At 21 years old, she met an American soldier who was stationed in Germany, and began to discuss the idea of moving to the United States with him. As she saved every penny for the move, she was nervous but certain this was the best decision for her daughter.

“I saved up $1,200 euros, packed up a suitcase and moved to the United States with my daughter,” she said. “I did not know much about Washington at the time, and my relationship did not work out. I ended up trying to survive on my own with my daughter, but I never gave up hope that I was meant to be in the United States. I felt peaceful, even though it was a struggle to survive.”

She persevered through the next couple years until she met a special person who helped her see her own potential a little more clearly. She met her husband, Aki Smith, while volunteering at a local food bank and felt an instant connection. “He asked if I wanted to go on a date, and he has been my biggest inspiration since,” Schneider said.

Smith works at Pierce College, supporting the ASPIRE Program’s retention efforts by providing underrepresented Asian American, Pacific Islander and low-income students the services they deserve to help achieve their educational goals and navigate their way through the college system.

“I remember the first time Aki asked me what my educational goals were,” Schneider said. “In the moment, I was angry, because nobody had ever asked me that question before. But it didn’t take me long to realize that I needed to go back to school not just for myself, but for my family.”

Schneider enrolled at Pierce College in Summer Quarter 2019, and earned her general education equivalent (GED) in only eight weeks. “I was really committed,” she said. “My GED teacher said I should think about walking in the college’s graduation ceremony, and I did. When I stepped onto that stage, I thought if I can do this, what else is out there for me? For the first time, my mind expanded and I realized there’s so much more out there for me.”

Schneider is continuing her education at Pierce College, and plans to earn her degree in psychology or social service mental health, in an effort to help people who struggle in some of the same ways she has. “I am so proud to be the first person in my family to break the cycle of poverty and limited education,” she said. “I want to be an example to my family, and give them a better life than I had. I feel so proud, and I know that if I can do this, others can, too.”