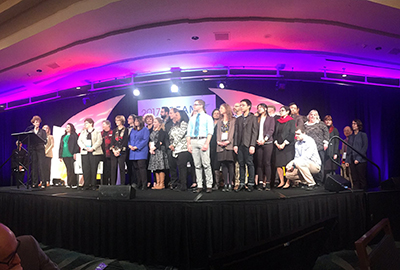 National community college reform leader Achieving the Dream (ATD) today awarded the 2017 Leah Meyer Austin Award to Miami Dade College and Pierce College District. The national prize is given annually to a college or colleges in the ATD Network that show measurable improvement in student outcomes driven by top-to-bottom cultural change in the institution.

This year’s award, sponsored by the Kresge Foundation and Achieving the Dream, is accompanied by a $25,000 prize for each college to continue its student success work.

“To be selected as a Leah Meyer Austin Award winner, a college must be courageous enough to make big, bold changes in everything that impacts the ability of their students to be successful,” said Dr. Karen A. Stout, President and CEO of Achieving the Dream. “Miami Dade College and Pierce College are strong examples of institutions that took bold action to align college-wide solutions that result in significant and sustainable institutional improvement.”

“Pierce College focused on better understanding its data in order to make big, college-wide changes to address its issue of dropping retention, course completion, and graduation rates for all students. Their great success in improvement in those critical areas sets them as an exemplar among community colleges. We’re very proud of their work,” said Dr. Stout.

Miami Dade College realized that too many barriers prevented too many students from remaining in college or completing their academic programs. To address this issue, the college undertook bold, institution-wide changes. During this transformation, for example, their three-year graduation rate increased from 31 percent to 34 percent, including an improvement of six percentage points for male students.

“Miami Dade’s commitment to increasing student completion drove the college to develop a change process that included new strategies, programs, activities, and interventions. Decisions were driven by what students needed to persist and complete their studies,” said Dr. Stout.

When Pierce looked hard at its aggregated student success data, the college was startled to find that its retention, course completion, and graduation rates were not at acceptable levels. Fall-to-fall retention rates hovered just above 50 percent, for example, and three-year graduation rates were below 20 percent. Pierce saw that to fully deliver on the promise of its goals for student success in a genuinely student-centered culture, it needed to better understand its data and to learn to make better evidence-based decisions. That realization sparked the college into action that would eventually result in broad-scale cultural changes.